The first day of my summer holidays I spent the evening shooting an ’92 Porsche. Ever since I saw ‘Drive’ by Nicolas Winding Refn years ago, I wanted to do a shoot with neon lights, but it never happened until now. It was actually after showing pictures I found on Instagram of a Porsche shoot with pastel pink and green light that I managed to get this shoot organized with a friend who is a photographer and another one who owns several Porsches.

I had in mind to shoot mainly with orange and blue light, inspired by Drive, but I also wanted to try and mimic the colours of police lights, using red and blue lights. Other inspirations for this shoot were music from Kavinsky, films like Only God Forgives and games like Hotline Miami. I had also just seen Too Old to Die Young which was 13 hours of neon heaven.

Since this particular Porsche is parked in a garage with a nice coated floor and semi-smooth white walls it wasn’t difficult to set a location. The lighting on the other hand was a little more difficult. We decided to rent a set of Astera AX-1 Pixel Tubes from a local store for about a €150 for the day. Since the garage has windows in the roof we had to do the shoot after sunset, which in hindsight made the date a little stupid. We did this shoot only a couple of days after the longest day of the year. So after a pizza and a drink we could finally go to work around 10 o’ clock.

We went for a very straightforward setup. The car parked diagonal to the wall and a meter or two from it. Setting up the Astera lights turned out to be more difficult than expected. It was easy to choose a colour, but took us quite some time to figure out how to set different colours at the same time. Luckily Maxim is handy with all of this and finally figured it out.

The first setup was with cold white light, which I turned more into blue tints by changing my white balance. I didn’t really like it because it was a little too sterile and commercial. It only took a couple of side on shots and didn’t really bother to shoot much details.

After that we changed the colours to red and blue. It didn’t really turn out the way I had hoped but for the detail shots it was quite good, giving a warm and moody vibe to the interior.

By the time the clock hit midnight I tried a last setup with orange and blue. This was exactly what I had in mind and I tried more angles. In the last minutes of the shoot I added some pink and this also made for some pictures I really liked. 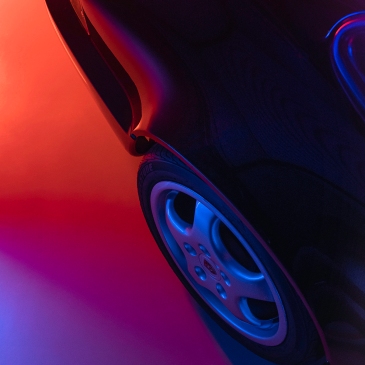 Exactly what I had in mind.

Setting up the lights was very tricky. This one is made by having an orange light shining from in front of the car, a blue one from the back of the car and a another orange light hitting the headlight to make it look like it’s on.

The possibilities are endless when it comes to colours.

Another tricky one. A couple of tubes hitting the backwall directly. One hitting the car and two orange lights to light up the headlights.

All of the pictures were shot handheld since I don’t even own a tripod. The Astera lights are pretty bright, but even then I was mostly shooting at F3.5-4 and below 1/100th of a second (mostly 1/60 and 1/80). The Pixel Tubes are delivered in a large and heavy case and with two extra cases for wires and other stuff. It was a pain in the ass to get them home from the shop and then to the shooting location. The size is very reasonable, but the weight is crazy. Changing colours and brightness is done on an iPad and is very easy once you get the hang of it.

No matter how much fun it was to shoot this, the real magic did happen in Lightroom and Photoshop. Colours can be changed very easily in Lightroom so I could play around and switch things up as much as I wanted. But the biggest part of the editing proces wasn’t the color grading, it was retouching. Shining bright lamps on a shiny car gives a buttload of reflections that had to be removed in post. Also the wall that was used as a background had a waterhose fixed to it and a poster. All of that had to be cloned out of every picture. I made a video showing the editing process and as you might notice I really struggled cloning all of those unwanted objects out of the photo.

A list of gear I use for automotive photography.