When I went to New York I expected to take a bunch of photos on Halloween and even though I knew I wouldn’t be at the parade I still had an image in my head of what it could be. For halloween evening we had planned to go to a pumpkin festival about an hour from NY by train. I thought this would give the opportunity to take a diverse series of images. Then Halloween came and everything was different.

The morning was quite dull with gray weather. But as soon as I left the hotel I knew that the Halloween spirit was wel alive in the city. We walked around a little bit and I snapped a couple of shots. The only one I really like is the one with the dog, I like the desperation and the composition. The costume the dog is wearing is bright red and I found it to be distracting so I went for a black and white edit. It determined that the rest of the series would be black and white too since I wanted to do something a little more coherent than usually.

I took four in pictures of this dog. Not sure why, but some are soft even though I shot at F5.0. Usually the softness only starts at around F3.5. Luckily liked the third one the most and that one came out sharp too. 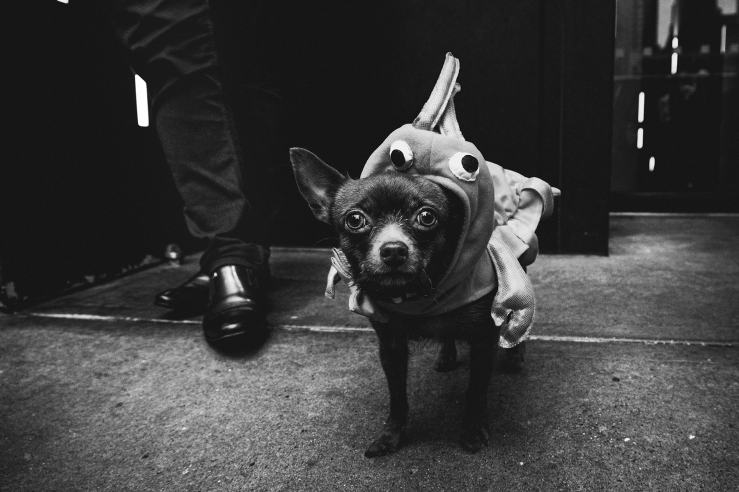 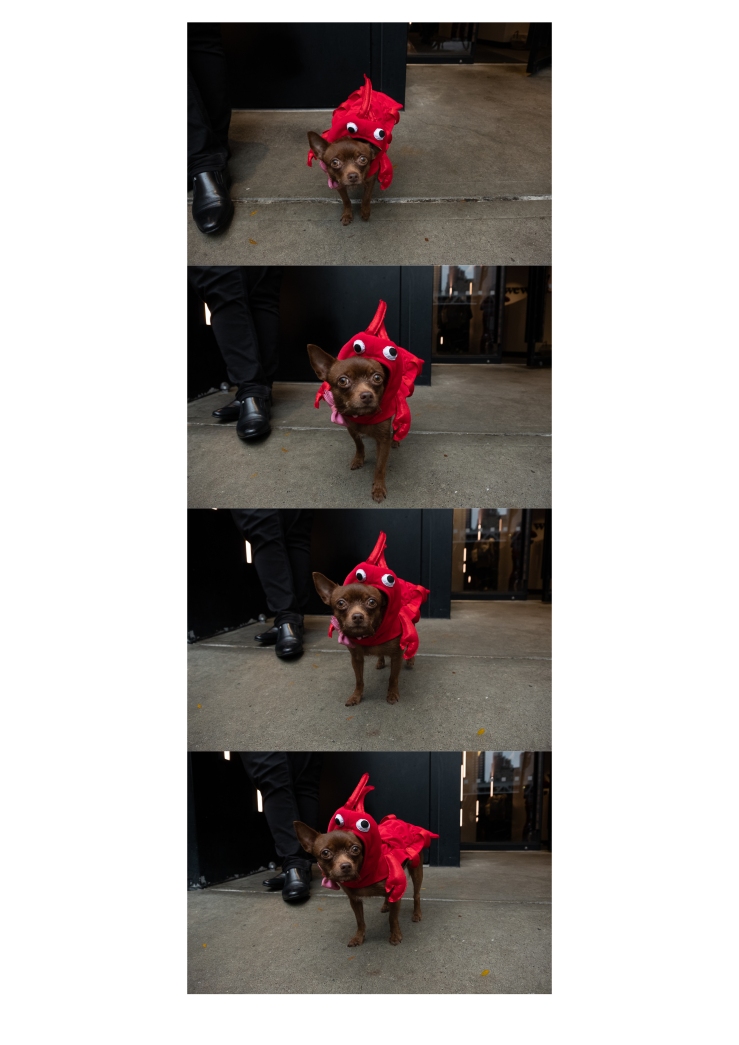 In the early afternoon we were close to Times Square and while walking I noticed a guy dressed up as the Joker and it was so realistic that it was scary (which is the point I guess.). I usually just photograph what I see and when I’m too slow and missed the shot I just let it be. But this guy looked so cool that I had to get a shot. He was almost running so I had to cross the street and run to get in front of him. He obviously noticed me and slowed down so I could take a couple of pictures. Not all pictures came out sharp for some reason (same softness as with the dog photos) and my favorite photo is of course the most unsharp one. I edit them in both color and black and white but I think the color photos don’t have the vibe like the black and white photos. 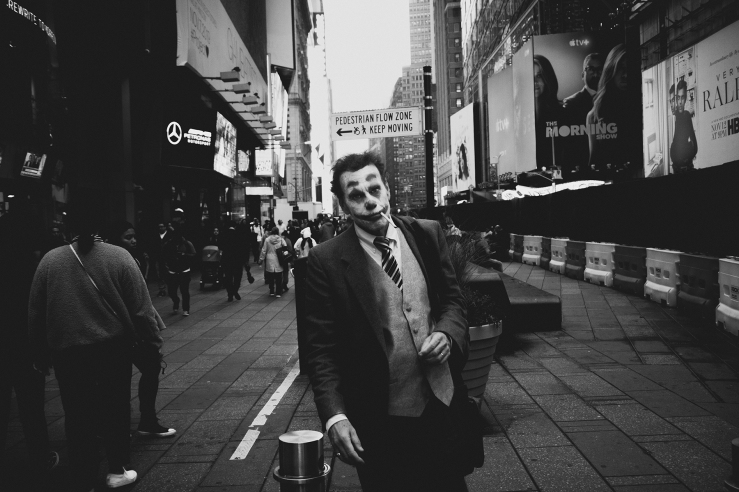 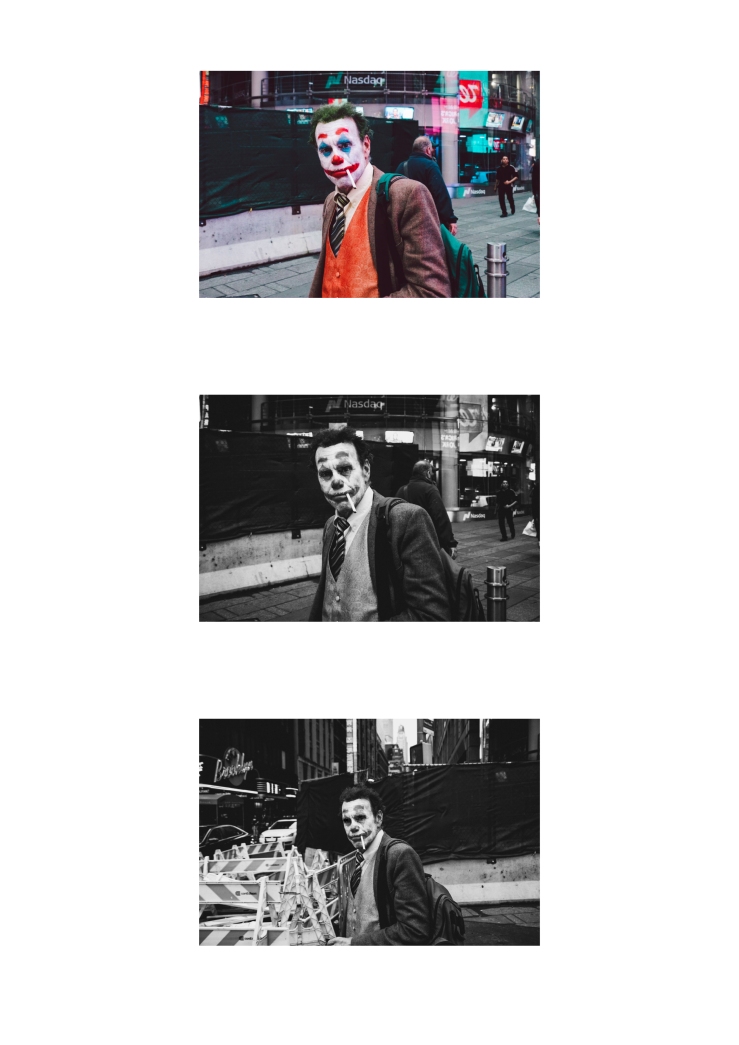 Since I was already on Times Square after running after the joker, I had a good look around, but there wasn’t much going on. And then this guy, dressed like Jezus, comes one wheeling through traffic until police made him stop. I took several pictures and went for the one where he is closest to me and where he is also looking most like Jezus. My camera focused on his hand unfortunately, but it still holds up I think.

By then it was time to get on a train to the Great Jack O’Lantern Blaze in Tarrytown. I genuinely thought this was in a town and I would be able to take some pictures of people trick or treating but it was like a well organized event on a historic site. So it was absolute shit for pictures, but super cool to see and experience.

By the time we were back in New York we were tired and starving so we ended up going to a restaurant first. When we were back on the streets it was already quite late and we decided to walk to the hotel and hope to catch some scenes on the way. Although we were walking away from where the parade was going on there were still plenty of people coming and going to halloween parties.

I took several pictures and I’m really happy with some of them. The one with the pimp and the kissing couple is probably my favorite. I saw the guy just standing and smiling and snapped a shot and when I was taking it I realized there was a couple kissing just behind him. I couldn’t be more lucky.

The guys with the American flag is another one I like, it’s not the best, but I like how the flag is filling the frame. The other shots are ok I think, but in hindsight I’m thinking I should have used a flash and go for that look instead of trying to work with the natural light. On the other hand I’ve seen many pictures from that night that were shot with flash.

Just before we arrived at the hotel this guy with a skull mask was playing Thriller by Michael Jackson in his low rider. In a minute time there were probably 50 people filming him with their phones but I tried to take a couple of portraits. I didn’t speak with him at first, but he noticed me and started to pose which made for some cool shots that capture how I experienced Halloween in New York. 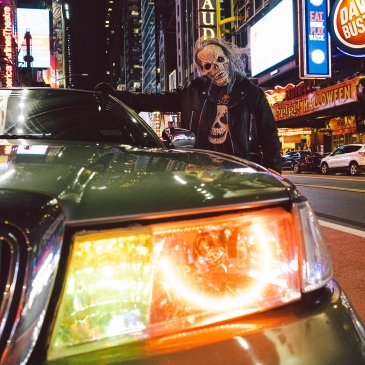 I only have a few regrets from that evening and one of them is that I didn’t stay up way later and took more shots. The other one is that I didn’t take a subway because it must be a great location to shoot all these people in their costumes and it’s also an easy way to see more crazy things then when you’re walking the streets.

A list of the gear I use for travel photography.