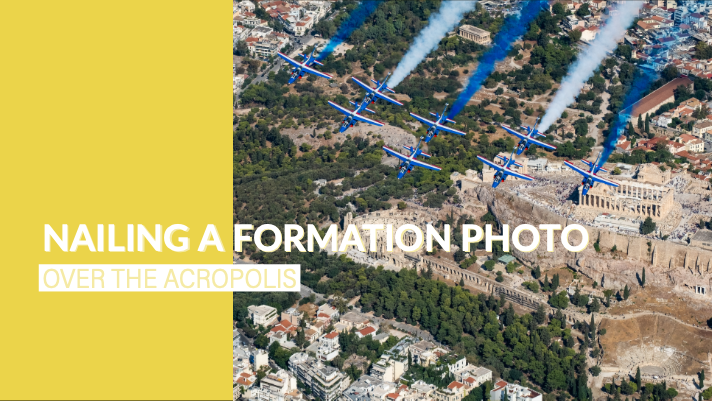 This post is about one of the most challenging photos we made this season with the Aviation PhotoCrew. Trying to catch the Patrouille De France over the Acropolis in Athens.

Last year (September 2018) we had a flight planned over the Acropolis with the PC-7 Team and afterwards with the Aegean Airlines A320. Since I was joining the crew to the Athens Flying Week rather unexpectedly, I was mainly sitting in the copilot seat. Also for this special flight I was seated next to the pilot, wearing a headset and overhearing the coms. It is unbelievable how difficult it is to nail such a photo. It’s usually strictly forbidden to overfly the Acropolis so everything had to be taken care of with ATC and a Notam had to be filed. Luckily the people of Athens Flying Week were very helpful in getting things organized. Another issue is to get the subject lined up correctly and in time when passing the Acropolis. Since, even with all preparations, we were still not allowed to directly overfly the Acropolis, we had to turn at the right time to get the building perfectly on our six. I think it suffices to say that we once again could appreciate the inspicable flying skills of our pilot and the other crews involved.

Anyway, for me the flight was spectacular for other reasons too. I didn’t get to see a single plane, but seeing Athens and the Acropolis from this vantage point was truly amazing. The size of the city is surprisingly big.

In the end the flight was a great succes so this year we had several of these planned, but due to bad weather (in Greece, in summertime; go figure!) we only ended up doing one with the Patrouille de France, the French Air Force Display Team. Because the flight was planned on Sunday, in between our arrivals and departures project, we had several spare seats and I finally got a chance to test  the comfy seat and try to nail a formation photo over the Acropolis.

I was seated on the right hand side, which can be a disadvantage when trying to photograph a large formation. Certainly when they’re flying close to our Skyvan you usually don’t see the planes flying on the far left of the formation. Anyway, soon after take-off we were flying over the suburbs of Athens. After circling for a while the Patrouille showed up right on the planned time and in a short while they were close on our six. Too close unfortunately. As soon as they were behind we headed towards the Akropolis for our first pass. The photodirector tried to back them off, but for this first pass they were simply too close. I tried to get the shot, soon realized it was a failure and decided to go for a making off photo, hoping that the guys on the edge of the ramp would catch the shot.

Luckily the second run was a lot better. They were further out and everybody could now see the whole formation. After the first run I now also had a couple of landmarks that would serve as a countdown to the Acropolis, because when you see the building, you’re actually already too late to start framing and shooting. Since I was on the right hand side I was laying almost on the legs of the guy sitting in the middle, laying low so I wouldn’t be in his frame. And then the smoke came on, forming the Hellenic flag. Another sign that the Acropolis was coming up. I just fired a couple of bursts and hoped for the best. Since the planes were quite small I was hoping that my camera was focussing on them and not on the background (even though I was shooting at F8 or something, so I wouldn’t matter all too much).

Since there was enough time we did another pass with the French tricolore. 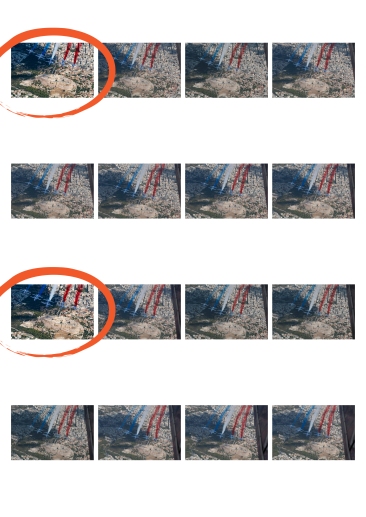 In the end I found this to be a stressful flight cause I needed to get the photo, but being able to fly over the Acropolis with 8 jets on your six is something I’ll never forget!

You can watch the results below.

Read all about the gear I used for this shoot.